There are approximately 450 species of snakes in Indonesia. Of the varieties found around Jakarta, only five or so are dangerously venomous. Like any wild animal, the snake will usually try to escape before it will attack, but they will usually bite if stepped on. Most are nocturnal and can be avoided by not walking barefoot at night in dark, swampy or bushy areas. Keeping one's garden clear of thick vegetation, tall grass, and dark rocky hideaways helps dissuade snakes from nesting there. It is hoped that these illustrations will assist in identification of those species which are venomous. Indonesians often wrongly identify snakes and identify ALL varieties as poisonous. However, a snake which cannot be positively identified SHOULD be considered dangerous.

Read more:
Dangerous Venomous Snakes in Indonesia
What to do with a Snake in Your House
Ron Lilley's Bali Snake Patrol Page

It is important to distinguish between snakebite and snake poisoning. The bite from a harmless snake can produce mild pain and extreme fear. A bite from a venomous snake may not necessarily mean that venom has been injected into the wound. If someone has received a bite, check for symptoms of toxicity, keep the victim calm and treat for shock, and keep the site of the bite lower than the heart, and immobile. DO NOT ADMINISTER ALCOHOL.

Some good snake-related advice from a snake lover in Jakarta:

One alternative to killing snakes you find in your yard is to call a member of the Jakarta Reptile Lovers Association. Pak Gunawan is one of the founders and runs the reptile house at TMII. He doesn't speak any English, so get someone to translate for you when you call him. He'll come to your home and catch a snake (particularly if it's very big or rare and it's not too far away) whether venomous or not.

If you get bitten by a non-venomous snake, it may hold on for quite a while as it doesn't know what to do. To get the snake off you, either use a metal spoon to prise open its mouth (I don't approve of this as you'll hurt the snake badly by breaking its teeth) or put the part of you that's being bitten into a bucket/bath of water -- the snake won't be able to breath and will let go. Alternatively, just sit down on the ground, relax and wait for it to let go. If you make sudden movements and run around, it will hold on tighter. (As snakes can't hear, it's quite ok to scream a lot as the bite will most likely hurt a lot.)

This rare burrowing snake only reaches a length of about 50 cm. Its slim back body has a line down its length with yellow markings on the small, flat head the belly is black and white checkered. The tail has a red-orange tip like chili pepper or a 'cabe'. It is shy and usually unwilling to bite. Its venom is neurotoxic.

Both the Malayan and the Banded Krait are black with yellow bands and may be from 1-2 meters in length. They are found in or near paddies and bamboo groves. If disturbed, they jerk and attempt to hide their head in the coils of their body. Due to their small head, shyness, and reluctance to bite, the chances of a fatal bite is slim unless one treads on a startled snake. Their neurotoxic bite causes little pain or swelling, but can produce muscle weakness, loss of coordination and eventual respiratory paralysis. 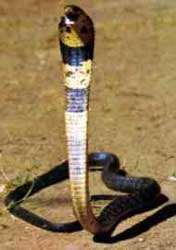 There are two species of cobra: the King Cobra, usually a resident of the paddies, and the Black Spitting Cobra, which nests in semi-urban areas. Both are aggressive if disturbed. The Cobra is easily recognized when he rises and spreads his hood. The colors of the snake range from black to brown to olive. Both can reach a length of 4 meters. Only the Spitting Cobra, sometimes seen in Jakarta, can eject a spray of venom for several feet, aiming at the enemy's eyes. This can cause temporary blindness but can be removed with repeated rinsing with sterile water. The nuerotoxic bite of either can cause pain and swelling with general muscle weakness following and eventual respiratory paralysis.

There are varying types with bands or stripes in colors ranging through brown, olive, and yellow. All have a paddle-shaped tail and are found along the coast and in the sea. They are shy and will not bite unless provoked. Their neurotoxic bite is dangerous and there is typically no anti-venom to be found in Jakarta for this species.

An example of a non-venomous Indonesian snake is the Retriculated Python pictured here: 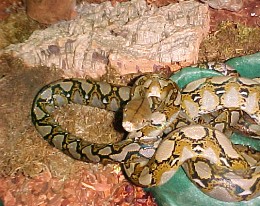 Not in the snake category, but just for your information: many varieties of caterpillars in Indonesia have an irritant in their fur. AVOID touching any furry caterpillars or the leaves they crawl upon, as skin contact can result in swelling, welts and severe irritation.

Initial Source: Introducing Indonesia, 5th edition, AWA. Our thanks to Paul Latus and frank Panaro for their updates on this information.

If you have any further questions about medical concerns in Indonesia, see the Ask the Experts.

We trust this information will assist you in making correct choices regarding your health and welfare. However, it is not intended to be a substitute for personalized advice from your medical adviser.