An introduction to Indonesian textiles and their traditional uses

Any expat that attends bazaars organized by community groups will see heaps and piles and overflowing tables stacked with gloriously patterned silk and cotton batiks and weavings from every part of Indonesia. With time you may feel inundated with the sheer quantity and variety of Indonesian traditional textiles. 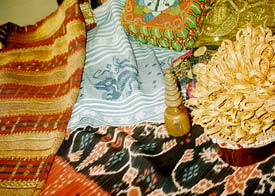 There are Sumatran silks, glowing and rich with scarlet reds and shining golds, and Sumbanese ikat, with rusty reds and deep blues in bold patterns. The colorful rainbow stripes of Timorese ikat contrasts with the deeper browns and oranges and navy blue of the ikat of the islands of Alor, Flores and Savu. Every color can be found in the soft cotton batiks of Java - the bright colors of the north coast cloths, especially from Cirebon and Pekalongan, and the fine browns, whites and indigos of the court cloths of Solo and Yogyakarta. There are glorious Javanese silk batiks as well - soft and floating, in glowing color and design. From Bali there is a veritable explosion of color and texture - in both traditional and totally modern design.

With all this variety, how can we choose something to own for ourselves? Some people go overboard and get one (or more) of everything, others boggle at the choice and leave Jakarta never having purchased one of Indonesia's most famed products. A common complaint is that not understanding how a cloth is made, and what it should be used for, makes deciding what to buy more difficult. Here's a quick run-down on some of the most popular textiles.

First of all, most of these cloths are really items of clothing. The large flat cloths, or selimut, from Nusa Tenggara in 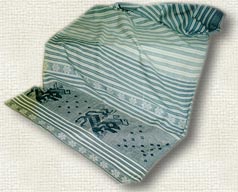 eastern Indonesia - including Timor, Sumba, and Flores, are used by men as a sort of loin cloth-skirt, often worn with a belt. Another cloth of the same size is tossed over the shoulder. Traditionally, no shirt is worn, but today villagers often wear a t-shirt or collared cotton shirt. A very old, thin, faded selimut is usually worn under a good one as a sort of slip - useful if one gets into a situation where one might get dirty. The good outer selimut can be removed without threatening one's modesty. It's also handy in the weekly pasar - if a textile collector comes by and offers to buy the selimut right off one's back - or rear end, as the case may be - it's possible to sell and still go home decently covered. 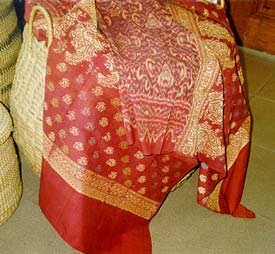 The tubular cloths from this same area are women's sarongs. They're slipped into, pulled up to the waist or underarm, depending on whether one wants a skirt or the strapless look, and the top is carefully folded to cinch the sarong tightly around the body, then rolled down to secure. Traditionally these were worn as a strapless dress, with a selendang, or shoulder cloth, for formal occasions, or as a skirt, worn with or without a blouse. Today in some remote villages it's still possible to find women pounding rice with only an old sarong tied around their waists, but they now usually pull the sarong up when the foreigners' cameras come out - village women have learned that being an object of curiosity can be embarrassing. Formal dress today consists of a beautifully patterned sarong, worn with a fine blouse and selendang. Everyday wear is often an old sarong with a t-shirt.

In Java, most people now wear Western clothing. Traditional dress is worn for ceremonies, for Friday prayers, and in its casual form, to relax in at home. For casual and Friday wear the soft cotton tubular sarong is very cool and comfortable. Men wear them in plaids, and women often in soft floral patterns. Tubular sarongs are usually worn by older women; younger women prefer the more flattering fit of the tightly wrapped two or two-and-a-half meter kain panjang (literally: long cloth). The central Javanese courts of Solo and Yogyakarta are famed for their intricate batik kain panjang in fine cotton - worn by both men and women alike wrapped snugly around the waist and hips, with tiny pleats created with the loose front end piece of the cloth falling straight in front. Holding the kain up is a heavy cloth belt for men, and a hidden wide elastic belt for women. Men wear a short jacket, often with gold trim and buttons, and women wear a cotton blouse called a kebaya. The style of the kebaya varies - there are gauze-fine ones with beautiful embroidery, or heavier ones with lacy cutouts. Older kebaya have no buttons; they were held closed by ornate gold or silver pins. Over the shoulder, women wear a batik selendang, often in the same pattern as the kain panjang.

In Sumatra, as in Nusa Tenggara, the narrow, elaborate tubular sarongs are worn by women. The ornate golden

threads on the sarongs of Lampung make them very heavy, so the top is often left plain so the sarong can be tightly tied and folded. Men's and women's sarongs from the Palembang area are also often shot with gold threads, though here women take the prize with their beautiful silk ikat selendang and headscarves, with the edges trimmed in gold. Several popular textiles from Sumatra aren't worn - they're wall hangings or gift covers for ceremonies. The tirai, a long brightly colored cloth with triangular hanging strips often heavily embroidered and covered with sequins and mirrors, is hung for festive ceremonies. The ship-cloths, more properly called tampan (if small) or palepai ( if large), are also brought out for ceremonies. The tampan is used to cover gifts in certain rituals - for example, during weddings. The palepai is hung to decorate the house for most ceremonies or festive occasions.

When you shop for batik, you may find the tubular sarongs still flat, with the final seam unsewn. If you're planning to cut the batik to sew into a blouse or dress, ask what the size is - there is a usual size of approximately 2 1/4 meters, but there is still some variety. You'll often be offered a kain panjang with matching selendang if it's a pattern favored by women. Sarongs from Nusa Tenggara may be pieced in sections - the loom width is small, so large cloths are actually sewn together from smaller matching sections. This can affect the way you design a jacket or dress with these ikat. When storing or displaying Sumatran cloths with gold threads be aware that these threads 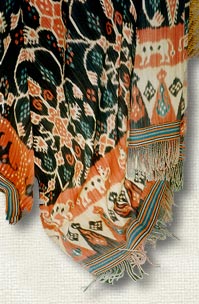 are brittle, so they're best not folded. Older cloths were often folded to wear in the villages so the threads are often already snapped or frayed - make sure you can live with these imperfections.

The best of these cloths traditionally formed part of a family's assets. They were brought out and worn or displayed during ceremonies, used as dowry items, and exchanged during ceremonies. Many of these customs are still followed. For example, during weddings, Batak families keep careful count of which clans donate what type of large woven cloths, called ulos, and give certain cloths back in exchange in a very formal, ritualized set of ceremonies. An ulos is also worn at least as a shoulder cloth during most Batak ceremonies - even society weddings in Jakarta, over Western suits. As a family asset, textiles were often sold to raise cash; the custom persists today. School fees, funeral expenses, or wedding costs can all be met by selling prized textiles. These textiles may be old, but new ones have value, too.

Weaving and batiking are still a vital and thriving part of Indonesia's way of life. Join the rich textile heritage of Indonesia - go ahead, buy that cloth. You'll be in good company.

Our thanks to Sue Potter for her willingness to share her expertise on Indonesian textiles with the community!

Here are some other pictures from Sue's extensive collection: 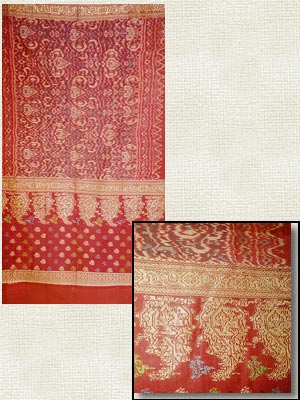 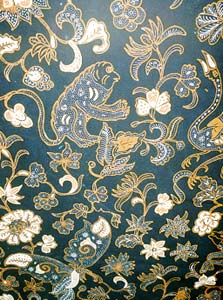 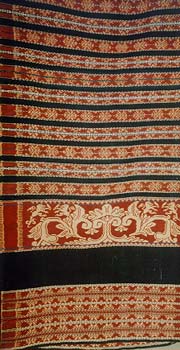 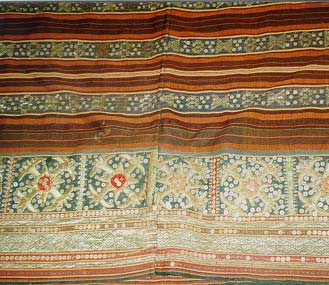 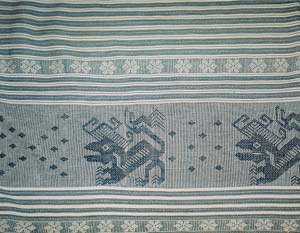 Many items for personal or household use are also made from traditional fabrics: 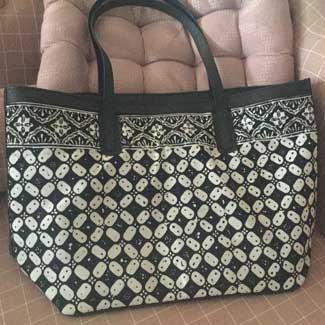 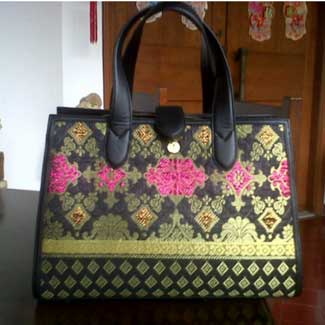 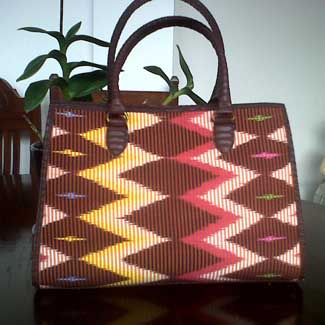