The Kebaya - An Indonesian Traditional Dress for Women 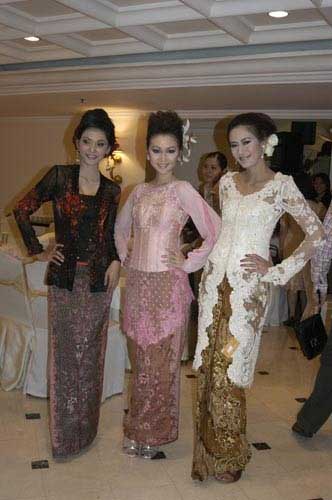 History of the Kebaya

There is much speculation as to where the kebaya could have originated from. There are some who say that the kebaya originated in the Middle East, while others argue that it may have come from nearby China. Derived from the Arabic word kaba meaning “clothing” and introduced to Indonesia via the Portuguese language, the term kebaya has come to refer to a garment whose origins appear to be a blouse. It was first worn in Indonesia at some time during the 15th and 16th centuries. This garment is similar to what is described as a “long, fitted, flared kebaya known as kebaya panjang6, worn in the 16th century by Portuguese women arriving on the south-western coast of Malaysia, situated across the Malacca Straits from Sumatra, in northwestern Indonesia.

Many sources also cite Chinese influences on clothing of the time, one source comparing the kebaya to an open-fronted long-sleeved tunic worn by women of the Ming Dynasty. The introduction of this kind of dress were accredited to two major occurrences of this time; the emerging influence of Islam and the arrival of the Europeans to the archipelago. Whether it was Arabia or China that brought us the wonderful kebaya, there is no denying how quick the use of this garment was made uniquely Indonesian and spread from one island and ethnic group to another which its own regional variations. This quick diffusion of the use of the kebaya was also linked to the spice trade that was happening during this time in history.

Origins of the Kebaya

After Dutch colonization, the kebaya took on a new role as the formal dress for the European women in the country. During this time, the kebaya was made mostly from mori fabric. Modifications made to this traditional costume later introduced the use of silk and embroidery to add design and color. The most dominant form of kebaya worn on the islands of Java and Bali today, can be visibly traced to the kebaya worn in Java and Sunda from the late 19th - early 20th century onwards.

Many of the easily recognizable features of today’s kebaya – a tight fitting blouse that enhances the torso of the woman; the fold-back collarless neck and front opening; long sleeves; and the type of semi-transparent fabric – are evident in the kebaya of the past century. Traditional kebaya required the torso of the women to be wrapped with a long piece of cloth called a stagen. Women of higher social status would have help in wrapping their torso with the stagen however women who were not so fortunate to have help could dress themselves by tying the end of the stagen to a post and literally wrapping themselves into it.

The semi-transparent kebaya blouse was then worn overtop of the stagen.  This blouse was fastened with a brooch rather than buttons and buttonholes. It was customary to combine the kebaya with kain – a length of unstitched cloth worn on the lower part of the body, often (and incorrectly) referred to in the English language as sarong. This kain was wrapped around the body with the pleats being placed at the front of the body. Traditinally this kain was dipped in a cornstach solution and then carefully folded by hand into pleats and pressed to produced the crisp look that was desired.

Indigenous Dress in the Making of a Nation

Considering the enormous historical – political and social – shifts that have occurred in Indonesia during the last century, the form of the kebaya, has remained relatively unchanged. Its function and meaning however, in contrast to its form, has seen major changes in colonial and post-colonial Indonesia, operating to meet different groups’ political agendas, social needs and aspirations. The kebaya has come to symbolize the emancipation of women in Indonesia through a representation linking the kebaya to the 19th century “proto-feminist” figure of Raden A. Kartini.

During the 19th century, and prior to the Nationalist movement of the early 20th century, the kebaya had enjoyed a period of being worn by Indonesian, Eurasian, and European women alike, with slight style variations. During this time distinguishing class and status was important and produced variants of the basic costume. The kebaya of Javanese royalty were constructed of silk, velvet and brocade; Javanese women belonging to the commoner class wore figured cottons; the kebaya worn by Eurasian women was of white cotton trimmed with handmade European lace during the day, and of black silk in the evening; while the Dutch women preferred a shorter white kebaya. It was even possible for Dutch women planning to travel to the Dutch East Indies to purchase their kebaya in the Netherlands prior to leaving.

In Bali, the kebaya has a much more recent history. The Dutch, whose occupation of Bali began as late as 1849 in the north of the island, and whose direct rule did not begin until 1882, are believed to have enforced the wearing of the kebaya. At the time Balinese women’s breasts were uncovered, except for formal and ceremonial occasions, during which a sabuk might be wound tightly around the upper torso, covering the breasts but leaving the shoulders and arms exposed. The women of Buleleng, the regency of northern Bali, therefore would have been some of the first to adopt the kebaya.

Other sources however, do not locate the kebaya being in use until the early 1920s  by which time it was in full use in other areas of Indonesia. It is via the royalty and the palaces that the kebaya appears to have been disseminated out into the community. New dress codes adopted by members of the royalty returning to Bali from Java were passed down through the caste system. Yet despite the fact that clothing is often used to separate class, there seems to be no evidence of the time to indicate that there were any rules delineating styles of kebaya according to caste. Differences in kebaya cloth were more likely to be an outcome of differences in  wealth.

By the 1920s however, and with the full emergence of the nationalist struggle in Indonesia, European women stopped wearing the kebaya because it was identified with typical Indonesian attire.  For the European colonizers the Kebaya had become associated with Indonesian nationalism.

During the period of the Japanese occupation of Indonesia (1942-1945), educated Indonesian women prisoners-of-war chose to wear kain-kebaya rather than the western dress allocated to them as prison dress. A different set of political conditions produced a reversal of meaning. In this situation the women employed a cultural code (of traditional dress) to assert their political position, differentiating themselves from their European women that were also prisoners-of-war.

During the Proclamation of Independence by President Sukarno on August 17, 1945, the only woman in attendance, Ibu Trimutri was wearing kain kebaya. This image helped transform the kebaya from mere traditional dress, elevating it to the status of national dress for Indonesia women.

From the Palace to the Street - Popular and Traditional Images

While the kebaya is worn by a wide range of women from the former President Megawati to the jamu street vendor, the kebaya could never be claimed to operate as a social leveller. Women who sell jamu (traditional herbal medicine), from young to old, and right across the islands of Java and Bali are wearing  kebaya.  Today, in Indonesia the image of a woman wearing  kebaya sells a variety of products from traditional herbs to Betadine to fried chicken. As an icon the women in her traditional clothing - kebaya - sells tradition and all the purity and goodness belonging to Indonesian cultural traditions. Perhaps she also evokes an element of nostalgia for urban consumers. Traditional as a way of life, is often less about the differences between rural and urban settings, than about socio-economic and class distinctions. For women 50 years and older, whose occupations and way of life come to distinguish them as traditional, traditional clothing of kain-kebaya is their choice of daily dress. These women, the majority of whom belong to the lower socio-economic group, often work in traditional settings such as markets, are employed as house servants or work in the agricultural sector.

If we try to define what a kebaya is, it may prove to be difficult as it is constantly changing to reflect the changing times and fashions that Indonesia is experiencing. Nonetheless, it is possible to make some generalizations about the kebaya. Most Kebaya are made from a lace brocade. Most kebaya fabric uses a floral motif either printed or woven into the textile and its length can fall somewhere from above the waist to below the knee. It usually, but not always, has long sleeves. It is usually fastened at the front, and if not, then gives a semblance of doing so. Some variations of the kebaya will use a batik sash, which is coordinated with the kain, draped over the shoulder as an added accessory.

Although women in the market can be seen wearing kebaya, we can also see exquisite variations of them in government gatherings and parties and high society social functions. The beauty of this national dress is undeniable. Some of the most influential women in Indonesia are married in kebaya that can be described as “works of art” with their hand embroidered detailing and beading. Designers such as Ami Amianto have helped to promote the kebaya not only as a important part of Indonesian clothing history but as a very beautiful item of clothing that Indonesian women are proud to wear.

So the next time you see a women wearing a kebaya you will understand that she is not just wearing a functional piece of clothing but she is also wearing a symbol of Indoneia’s cultural history which represents national symbolism and high fashion too!

This article was written by Gene Sugandy, with research from the following sources: