Floods are inevitable in Jakarta, and no area seems immune from the recent ‘flash’ floods that hit even the most affluent areas of the City. So how do you beat these floods?

Indonesians are very adaptable people, and find a solution for themselves, rather than wait and get trapped in a flooding area. So they simply take off their shoes, roll up their trousers or jeans, and wade through the water, casually wading through the least flooded area of the streets.

Drivers have a different solution, they park up on the highest piece of land, wait and if the floods worsen, lock up their car and join the slow meandering lines of people wading through the water.

Some drivers take a ‘chance’, and drive through the flooded waters, a chance that can end up with their car being stuck in middle of the waters but also a ‘chance’ that they can power their way through the flood. Owners of SUV’s love this challenge, and always take a chance.

I have a flood survival kit, after being caught up too many times, in many flash floods. So, armed with a patient smile, and a small backpack containing an umbrella, a pair of rubber throngs, a pair of waterproof army trousers, an extra T-shirt, a small towel and several small waterproof bags to keep my mobile, ipod and wallet dry, I wade my way out of them. 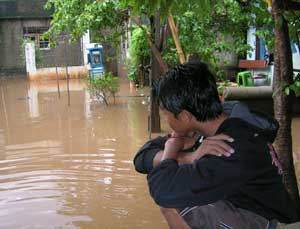 After being stuck twice in floods, once for over 11 hours in Java, I now wait around an hour, if the rains do not stop, and the water continues rising, then I will follow the slowly meandering line of people out of the flooded area. Then figure out a way to get back home, or to the office.

Last Friday, I discovered this beating the flood attitude does not always work, floods can partially hit areas, meaning main roads can be cut off in places, and temporary Islands are formed around the dry areas.

One way to judge this, is to watch the traffic, no traffic in a city known for its traffic, means the road has been cut off. Traffic arriving from one lane, means that lane is only flood free, and only larger buses and trucks getting through on any road, means that nothing else can pass through.

Then there is another problem, if it is still raining, and you are on a dry spot on the road, there is no guarantee you can get any transport, or even wait in a roadside restaurant, Internet café or even a hotel room, if things are getting really bad. Often parts of a road are dry, but the surrounding houses and businesses are either in the process of being flooded or are flooded.

So what do you do, stuck on an island of dry land, that used to be a main city highway, with incessant rain falling?

Indonesians have a unique answer, stop a passing container truck, and jump on any available space it has. Forget taxis that take a chance, needing the fare and usually end up driving you around, looking for a way out. These trucks make it through most flooded areas, and get you close to home, were you can jump off, and walk home. 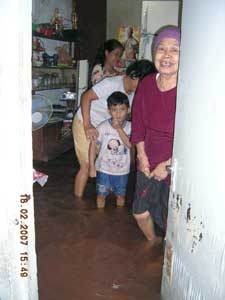 Floods are not funny anymore in Jakarta, and when the city’s main business district is hit, and the only main road to the airport closed. Things shut down, descending into an orderly chaos, were ordinary Indonesians adapt quickly, and find a solution, even if it is a very uncomfortable one.

Neither is Jakarta or Indonesia, the only country that has problems with flooding, other countries have the same problem, even developed countries like Australia and the USA. But Indonesia does not have enough resources to deal with the floods.

There is no ready supply of rescue helicopters, or boats. The city’s rivers are not dredged, because the city does not have enough dredgers. So people have to improvise, and find a solution themselves, with whatever resources they have at hand.

In 2007, the Big Flood came to Jakarta, and for two weeks, the city groaned under the stress of almost two weeks of flash flooding, leaving many areas of the city under a meter of water. Some areas were effectively ‘abandoned’ for days, but then came the miracle of Jakarta.

There were no reports of looting, and the city’s population calmly accepted the floods, without the chaos seen in other cities around the world, like New Orleans.

But everyone here must be thinking, Will the rainy season floods ever stop?

When flood water inundated much of Jakarta, Indonesia, in 2007, many were quick to blame climate change. The city is certainly susceptible to rising oceans, with about 40 percent of land below sea level. But it's also not doing itself any favors. The city has been carelessly pumping its groundwater, leading neighborhoods to sink further. "Jakarta is one of the worst sinking cities in the world," says JanJaap Brinkman, a hydrologist with the Dutch water research institute Deltares, which has been working in the city to help plan for what may be a very wet future. He was at the recent American Planning Association national conference to explain some of the city's major issues. Venice and Ho Chih Minh City face similar problems. But unlike Venice, which is subsiding at a rate of about 2 millimeters per year, or Ho Chih Minh City, which is sinking about 2 centimeters per year, parts of Jakarta are sinking at 10, 15 or even 20 centimeters per year, according to Brinkman. by Nate Berg (excerpt from Atlantic Monthly)