It's a Ming Thing!

Across the centuries ... traders have traveled the world in search of rare and exotic items. Unlike traders of 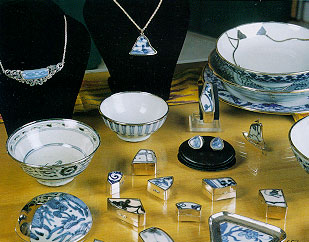 centuries past, you don't have to join a caravan or sail the high seas to acquire these treasures. Because of Jakarta's history as the center of trade for the Dutch East Indies Company, many of these items are available right here in Jakarta.

Ancient porcelain trade from China to the West

The Spice Islands, known as the Dutch East Indies, were the source of many of the spices highly valued by Europeans. Because this vast archipelago straddled the ancient trade routes between west and east, traders from Europe, China, India and the Arab world passed through these waters to trade for valuable cloves, nutmeg and ginger and pepper. Indeed you can't study the history of Indonesia without quickly realizing the key role spices played throughout centuries of foreign trade and later in the colonization by the Dutch.

The Dutch East India Company was a major player in the China trade for 200 years, as they traveled through their home ports off the straits of Malacca, visiting the ancient trading ports of Banten and Batavia. They traded Chinese porcelain for spices and other goods.

Over the centuries of trade between China and the west, millions of porcelain articles were shipped to customers around the world. As fate would have it, many of these ships never made it to their goal. Storms, typhoons, collisions with coral or rocks, piracy and even intentional sinking by competitors caused the valuable cargoes to find an early watery grave. 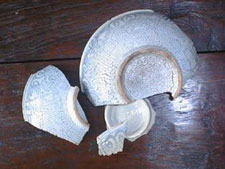 and Indonesia. Throughout the over 17,000 islands in the Indonesian archipelago, treasure hunters still dive today to shipwrecks to recover valuable cargo. The ancient cargoes of spices and silks may have rotted after centuries in the sea, but many of the ceramics are discovered in perfect condition in the hold of the sunken ships.

According to Indonesian maritime law, all goods found in these shipwrecks are archeological treasures and the Indonesian government is entitled to half of the proceeds from any auction of the goods. After a spectacular find by treasure hunters, Jakartans are treated to a display of recovered ceramics before they are shipped off to an international auction house.

Amongst the intact, priceless porcelain treasures from the Ming and Qing Dynasty, divers find broken ceramics 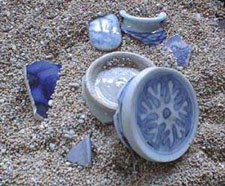 shards as well. While the broken shards may be of no value to the Indonesian government or collectors of ancient china, their artistic value has been recognized by jewelers who turn these small pieces of history into something quite beautiful.

In Indonesia, ceramic shards can be found buried in the ground near ports that were frequented by foreign traders. In Banten, the former center of the pepper trade, shards can be dug up in the areas surrounding the old port, where they had been offloaded from ships sailing from China which used broken ceramic items as ballast.

In Ambon, I am told, ceramic shards are clearly visible in the sand along the beaches, having been discarded by traders after breaking on the journey centuries ago.

Porcelain has been made in China since the 8th century AD, during the Tang Dynasty. In the 13th century, during 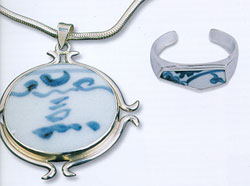 the Yuan Dynasty, Chinese porcelain artisans were exposed to Persian hand-painted ceramic wares, which utilized bright blue colors. When cobalt blue (sometimes referred to as Mohammed blue) was obtained by the Chinese in the 14th and 15th centuries from Persian sources, Chinese potters perfected a method of painting with the cobalt blue under a transparent glaze.

The art form further developed and reached its pinnacle during the Ming Dynasty (1368-1644). The town of Jingde Zhen (Ching-te-chen), in Jiangxi province, became the center for imperial Ming kilns and still is known for its excellent porcelain production. By comparison, the English did not 'discover' the secret of making hard-paste porcelain until the mid-18th century.

During the 16th century, traders transported tens of millions of pieces of Ming - and later, Qing porcelain to the West. Chinese porcelain techniques and designs greatly influenced future developments in European and Near Eastern ceramic wares. The Ming blue and white porcelain was highly prized by wealthy Chinese, Europeans, Arabs and Asians - which led to an explosion in the trade of the porcelain wares.

How the Blue and White is Made

The blue cobalt pigment is applied through decorative brush painting by highly skilled artisans directly on the biscuit (pre-kiln baked clay which has been molded into various items) before glazing. After firing in the kiln, the pigment melts in between the biscuit and glaze creating a crystalline glaze and the bluish designs. Ming artists also excelled in painting over the glaze, using brilliant enamel colors.

Chinese porcelain was strikingly different from the pottery made in Europe in the same period. The porcelain paste was translucent, and when tapped it rang like glass. It was admired for its whiteness and the fact that although it was much thinner than pottery, it was at the same time much harder and did not easily crack or chip. Moreover the designs were bright and the glaze did not wear away with use. 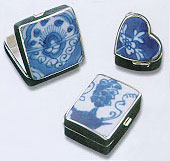 During the Ming dynasty the flourishing of culture led to the painting techniques were very delicate and elegant, resulting in highly artistic and very fine quality blue-and-white porcelain. Ancient Chinese techniques of brush painting were used to decorate the distinctive Ming ceramic wares. Designs chosen for the various pieces were based on the symbolism so prevalent in Chinese culture and arts.

Other important developments in porcelain production during the Ming dynasty included the wide usage of multicolor glaze, and the practice of putting the artist's signature, kiln's title and the year the piece was made at the bottom of each piece.

Porcelain from the various Chinese dynasties can be identified by looking at their glaze, motifs, forms, craftsmanship and firing techniques.

Throughout history, the ancient capital of Ayutthaya was a center for Southeast Asian trade. Modern day Bangkok 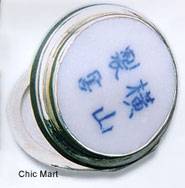 is well known today as a center for the trade of jewels and semi-precious stones. Gemstones from around the world make their way to Bangkok to supply the jewelry trade that flourishes under Bangkok's master artisans. In addition to gemstones, pearls, ceramic shards and other items are also traded in the ancient capital of Siam.

The challenge for a silversmith is to find distinctive high quality designs amongst broken ceramic shards. Hundreds of pieces are rejected to find that one perfect piece. A specific Chinese symbol often becomes the focal point of the design. Master Silversmiths cut the ceramic shards, then handcraft each piece into a one-of-a-kind pendant, locket or ring.

Ibu Vonny at Chic Mart chooses to source ceramic jewelry in Bangkok where she can guarantee that all pieces are Ming or Qing Dynasty china. Sold at Chic Mart on Jl. Kemang Raya.

The ceramic shards used by Iwan Silver of Kemang were taken from the flooring of a centuries-old Chinese home in the Senen area of Central Jakarta. Over the centuries, Jakarta has attracted many Chinese immigrants to Indonesia, many of whom came to establish trade between China and Indonesia. Of course, they brought their love of china with them.

As dishes, vases and other ceramic wares imported from China broke during normal usage, the broken shards were pressed down into the dirt flooring of this old Chinese house to create a kind of tile flooring. When the home was torn down in the early 90s to make way for the Senen Atrium shopping center, the historic and artistic value of these old ceramic shards was recognized and they were saved.

The simple patterns in this trade ware, also called kitchenware, form the backdrop for dramatic silver work done by a Iwan, a master silversmith, who owns Yusuf Silver and Gold Handicraft in Kemang, South Jakarta.

Ceramic shard jewelry is popular amongst the expatriate community as the pieces are very distinctive, with a historic flavor and blend the beauty of intricate silver designs and the ancient Chinese ceramic arts.

Master silversmiths transform centuries-old Ming Dynasty ceramic pieces into exquisite jewelry. Each unique piece of jewelry brings to mind the tales of explorers such as Marco Polo and the ancient legacy of the ancient spice and ceramic trade between China, the Spice Islands and Europe.

Silver/Ceramic Jewelry available in Jakarta through: