Superstition, facts and fantasy are all very common topics of daily chit-chat about life in the metropolitan city of Jakarta. Real stories from Jakarta’s own streets provide proof for this fact or fiction.

Places like the Ancol Bridge (Hantu Jembatan Ancol), which is still believed to be haunted by a girl who was raped and murdered there. She is seen walking on the bridge in the night wearing a white dress. Old buildings, like the Jakarta History Museum which is was the city hall during the Dutch colonial administration, is believed to be haunted by ghosts because it was the site of hangings by the Dutch of Indonesian and Chinese prisoners. The Cipto Mangunkusomo Hospital (Jakarta) is another reputed ghost sighting locale where at night a doctor is seen with a surgery knife and hands covered with blood with nurses screaming for help. There is no actual proof of the existence of these ghosts, but local people have claimed to see them.

Do these spiritual spirits actually exist? Why do these surgical and fresh air freak spirits appear and what do they want from us? Nobody knows for sure.

Sometimes a funny thought runs through my mind, that as humans wonder about the existence of ghosts and if they do exist, do the ghosts ask themselves if they believe in people. What do these ghosts do to entertain themselves? Do they eat, play, dance to soul music, drink beer, and have fun like humans, because to me roaming alone in the night with a sad face sounds too boring. Or is their only entertainment to scare the poor humans who normally do not harm to them.

Psychics (dukun) and paranormals in Jakarta offer a service to remove non-physical entities when they possess someone's body and soul. They request a handsome fee, or sometimes ask for a sacrifice, and they claim to be able to communicate with the spirits as well. You can even find a few listed in the local yellow pages directory.

Some people in Jakarta don’t just claim to have seen ghosts, as they claim to be lucky enough to capture them on camera as well. A television show called Dunia Lain, aired on the local channel Trans TV, claims to exploit this other world throughout Indonesia. Occasionally they are successfully rewarded with some foggy pictures and cams of these spirits. Many tourists from Australia and America have also taken part of ghost search expeditions during their visit to Indonesia as well. To believe or not to believe in ghosts is up to the individual; so far for most people the term "I don't believe until I see it" is a common reason for not believing in spirits. Just remember, seeing a ghost can be a very frightening experience, even just hearing them could bring chills down your spine. 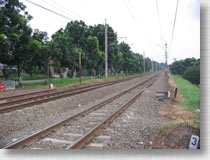 An incident occurred recently in an electric train parked in Bogor as it suddenly starting to run towards the suburbs of Jakarta at 65km/hour on its own withoutwhw any technical or manual support. This story is a good example of these fictional theories. And surprisingly the train just stopped on its own without any fatalities reported. Local people believe that the cause of this incident which they call the kereta hantu is an effect of ghostly spirits. And on the other hand, railway officials in Jakarta and Bogor blamed this unscheduled late night journey on technical errors and problems.

So when your lights turn off and on, even though you have paid your power bill, or if you hear strange moaning, but only during Britney's videos, or your room is spinning and you are not drunk enough yet to explain it … get ready to face the possibility of some ghost watching action in your own home as well.

In Jakarta rumors and gossip play a big part in spreading the belief of ghosts. Rumors of a haunted house in Pondok Indah spread when a fried rice vendor was reported missing after making a delivery there. Authorities had to hang a banner on the house stating that this ghost tale was just a rumor. Police officials were deployed when the number of people flocking to see the house caused traffic congestion and chaos.

In my own personal opinion I would say that ghosts are out there. Some people can see them and some people can’t. If you are lucky enough to see ghosts, advise them to change their white dress into a cool fashion outfit and their tobacco spilling beauty with a sun scream lotion so we don't get scared.

Expats in Jakarta should not be the least worried about the occurrence of ghosts in Indonesia, because normally we only talk about rugby, cricket, the Indonesian economy, and the Rupiah to Dollar exchange rate – all subjects which local ghosts wouldn’t understand, so they probably would not hang around us.

Watching local TV mystery shows reveals that these local spirits prefer to take public transportation like taxis, mini buses, angkot when they tired after their night’s walk. They don’t pay the driver of course, but just scare him and carry on with their free journey. Expats who drink, dance, and dine on the town until late usually return home in their cozy air-conditioned cars, so they should have no worries of these spirits.

If an expat encountered a ghost, communication would be a barrier as well. They would normally try to scare in their own haunting language speaking Bahasa Indonesia, Sundanese, or Javanese, all difficult for the average expat to understand.

So maybe that’s the reason only local people in Jakarta are able to see and communicate with ghosts, because these spirits may be too depressed and shy to appear in front of expats due to their lack of English speaking skills.

Written and copyrighted by Aliakbar, 2004.