The Celebration of Nyepi in Indonesia 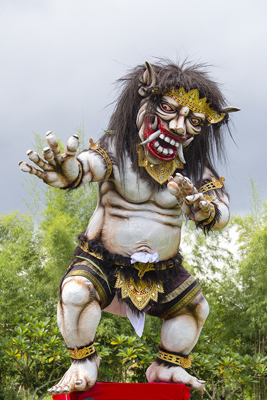 The Hindu Day of Silence celebrates the Hindu New Year on the Balinese Saka calendar. The largest celebrations are held in Bali as well as in Balinese Hindu communities around Indonesia. On New Year's Eve the villages are cleaned, food is cooked for two days and in the evening as much noise is made as possible to scare away the evil spirits. On the following day, Hindus do not leave their homes, cook or engage in any activity. Streets are deserted, and tourists are not allowed to leave hotel complexes.

Commemorating the start of the Hindu New Year, Nyepi is calculated according to the Çaka lunar calendar and falls at the time of the new moon in the months of March or April each year. The name Nyepi comes from the root word “sepi” meaning quiet or silent. Although it is a national holiday enjoyed by Indonesian residents throughout the country, Nyepi is celebrated in particular on the island of Bali where the majority of the 4.225 million inhabitants practice the Hindu religion, as well as in Balinese Hindu communities around Indonesia.

For weeks before Nyepi, you'll see banners and billboards going up with celebratory phrases such as "Menucapkan Selamat Hari Raya Nyepi Tahun Baru Caka" (Happy Caka New Year) and then the year is mentioned. In 2020, the Caka New Year will be 1942; in 2021 it will be 1943, etc.

While Galungan and Kuningan are considered amongst Balinese to be bigger and more important ceremonies, those days are not national holidays, like Nyepi.

Hinduism in Bali does resemble the religion as it is practiced in India as the tenets of the Hindu faith were first brought to Bali from the 14th century Majapahit Kingdom of East Java. But, they did not completely supplant the already existing strong religious beliefs and rich cultural life of the Balinese. Instead, Hinduism was blended with indigenous Bali Aga traditions and beliefs such as animism and ancestor worship to form a new and unique faith.

In Bali, religion is a very important part of everyday life and the people perform daily offerings to the gods and actively participate in the numerous temple festivals and rituals. Balinese Hindus also make offerings and perform temple rituals to placate demons that they believe personify the destructive forces of nature. 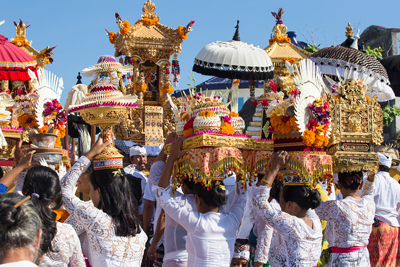 On the day before Nyepi major offerings are made to the demons at village crossroads, where evil spirits are believed to loiter. Before every ceremony a cleaning ceremony or mecaru must be held to drive out the devils and spiritually clean the place.

The rituals actually begin two days before Nyepi with the Melasti ceremony. On this day hundreds of people from each village carry temple artifacts to nearby beaches for purifcation. The people wear bright traditional clothing and join in colorful processions, starting early in the morning. The women carry tall offerings of fruit, cooked rice and natural foods on their heads, while some men walk along holding a long sheet of yellow and white cloth symbolizing the Bridge of God. The elaborate ceremonies continue until early evening and are intended as spiritual purifcation for the whole village. 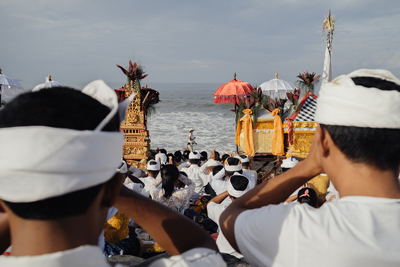 The day before Nyepi is known as Tawur Kesanga or Pengerupuk and is the day on which evil spirits are driven away. The villages and neighborhoods are cleaned, enough food is cooked to last for two days and at dusk people start to bang pots and pans and carry torches through their houses. They join neighbors making fearful sounds and sprinkling rice over the alleyways and roads. Demon effgies and huge monsters with bulging eyes made of bamboo, papier-mâché and cloth and known as ogoh-ogoh are carried through the streets in torch-lit parades. These demons represent the mythical giant Bhuta Kala and symbolize evil. This is the one day of the year when cock fghting is permitted because the spilling of blood is necessary for the purpose of purifcation.

At the main crossroads offerings are placed on the ground to entice the demons and evil spirits out of the homes in the village. The offerings, which are sometimes smelly and include blood (small chickens are sacrifced) – are to lure out the devils and demons. The offerings for the gods are placed on platforms specially made for this purpose. Once the demons have been lured out, the priests then recite curses on them in order to force them to leave the village. Everybody joins in to help by beating pots and tin cans, tooting vehicle horns, and making lots of noise. This action is called mabuu-buu. Children go around the villages in groups enjoying the fun.

The Day of Silence

On Nyepi, the Hindu Balinese refrain from all worldly and physical activities for 24 hours. It is customary to practice yoga semedi and catur berata penyepian or the four abstinences. These are: amati geni (refraining from lighting fres and using lights), amati karya (refraining from working), amati lelanguan (refraining from indulging in leisure activities) and amati lelungan (refraining from traveling outside the house). All Hindu Balinese stay inside their homes, but they are not supposed to speak to each other, answer the telephone, receive guests, watch TV, listen to the radio or use any appliances. Lights must not be turned on and no fres may be lit, including stoves for cooking or even lighting a cigarette. They also refrain from eating and drinking and are not supposed to do any work or engage in any activity. The time should be spent in silent meditation or performing prayers at the house shrine or merajan. Nyepi is a day of self-control and introspection in order to achieve spiritual purifcation.

Visitors and expat residents are not allowed to leave their homes or hotels on Nyepi. The streets will be deserted with only a few pecalang, community security offcers, ensuring that Nyepi is observed properly. Only emergency services and hospitals are allowed to operate as usual. Cable televisionand the internet are turned off for the day. All airports and ports are also closed for 24 hours with no fights arriving or departing on Nyepi. These restrictions will affect tourist's plans, so be sure and check to see what day Nyepi falls on to prepare - see Indonesian holidays.

The day after Nyepi is called Ngembak Geni. After successfully completing their day of restraint and purifcation people feel very happy and enjoy going out to visit family and friends to ask forgiveness for past mistakes. Hindu Balinese, wherever they are living, always endeavor to celebrate Nyepi, but it is on the island of Bali itself that you can sense the special nature of this unique holiday.

Nyepi (Balinese New Year) is also determined using the Balinese Caka calendar, the eve of Nyepi falling on the night of the new moon whenever it occurs around March/April each year. Therefore, the date for Nyepi changes every year, and there is not a constant number of days difference between each Nyepi as there is for such Baliese holidays as Galungan and Kuningan. The day Nyepi falls on in a given yearis determined by offices based on the cycles of the moon for that year. Whenever the new moon falls between mid-March and mid-April, that night will be the night of the great activities and island-wide exorcism, while the next day will be the day of total peace and quiet, where everything stops for a day.


Our thanks to Colliers International for sharing this article on Nyepi, to which we added additional information!