Cap in Hand: The Cap Man in Jakarta

Tucked at the end of an alley off Jl. Bangka Raya, opposite a beautiful mosaic mosque you'll find the Cap Man. No, he doesn't make hats - cap refers to the copper stamp used in the production of batik, cap batik. The Cap Man is best known for his ingenious combination of the cap (pronounced chop) with the beauty of native woods to create beautiful, functional items.

Who is the Cap Man?

Mohammad Sidik, a native Betawi, lived in Jakarta's batik district, Karet Tengsin. He noticed that foreigners who visited nearby batik factories bought a lot of batik. Thinking they may be interested in buying cap as well, in the early 70s he began buying old cap from the factories and restoring them. He peddled the cap on a bicycle house-to-house in expat neighborhoods, then later by motorcycle.

Business grew and Pak Mohammad moved to Pela and opened a workshop in his home, where it remains today, over 25 years later. The business is run by the original owner's son, M. Nuzur, and his children, Jamal and Tika. While still selling restored cap, they are best known today for their fine crafted wooden items inset with cap and made-to-order furniture.

Pak Nuzur also carries accessories made from water snake and python snakeskin, including belts, purses, bags, wallets. Ask him to unroll and show you a meters-long python skin. Snakeskin items can also be special made. 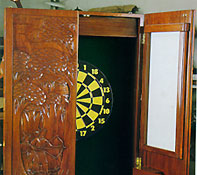 One of the pleasures of living in Indonesia is the ability to have items handcrafted to your specifications. The Cap Man has been crafting specially designed wood items for expats for over two decades.

The shop is a veritable treasure trove of mahogany and teak collectibles and dart boards, collector's racks for golf balls or spoons, lazy susans, bookends, trays, guitar stands, coasters, solitaire boards, mirrors and photo frames, cigarette and cigar boxes, cribbage boards and dice games, medal display cases, trivets, CD cases, jewelry boxes and cabinets and cupboards of all sizes. All are made on site, with intricate carving or inset with copper stamps.

Custom-made furniture is popular too. Bring in a picture of what you want, specify the dimensions, choose the finish and construction begins. Desks, chairs, stools, nesting coffee tables, game tables, bars and bar stools are all crafted from solid wood.

The Cap Man is the perfect place to find a uniquely Indonesian gift item or special momento or your stay in Indonesia. Explore items in stock or let your imagination soar and create a thing of beauty full of Indonesian memories with the Cap Man.

The resident stamp maker, Pak Husin states the best batik cap in Indonesia are crafted in his home town of Pekalongan, a major batik center on the north coast of Java. He learned the copper stamp making craft from his father, who learned it from his father and so on. When asked who was the first one in his family to learn the skill, 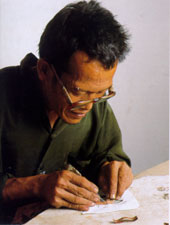 Pak Husin chuckled and said, “We don't know, it's just inherited”. Suffice it to say his family has been making copper stamps for the batik industry for generations and will continue to do so as he has trained his three sons in the craft. Cap making has traditionally been a man's job, as Pak Husin says that women don't have the strength for the final filing process.

The Cap Man carries over 30 standard cap designs including, fish, flowers, palm trees, dragons, elephants and ships. They also carry designs that appeal to tourists and expats, including becak, jamu sellers, farmers, food carts, Bali dancers and fishermen. Each cap takes from a half day to one week to create, depending on the intricacy of the design. Special designs can be made as well. Just provide a picture or drawing and give the craftsmen some time, and you'll see your design come alive in this truly unique media. You can watch the intricate, painstaking art of constructing a new batik cap on the premises.

If you've purchased an old cap elsewhere, the Cap Man can restore it for you. Watch the restoration process on-site as decades of dust and wax are torched from the cap's crevices, crumbled sections are repaired and the cap is strengthened before the final surface filing that brings out a fine copper shine.

The art of making batik cap

Developed in the mid-19th century, the use of copper stamps to apply wax in repetitive patterns enabled a higher volume of batik production compared to the traditional method which entailed the tedious application of wax by hand with a canting.

The cap is made from thin copper plating. The copper is cut into uniform-width strips with a simple metal scissor. The basic outline is formed by bending the flexible strips to match the outlines of the design on a paper pattern.

Shorter strips of metal are prepared with small cuts along one side - creating a fringe-like look along one side of the metal. The smaller strips are set into the outline and the fringe cuts are bent sideways to create diagonal slashes within the outline of the design. New sections are held together by small overlapping teeth in the adjoining sides and bent strips of copper which hold the sections together.

Aluminum plating is used to create dots. The thin strips are fringe cut on one side and each individual cut is tampered until round and the strip is set into the outline. While good for producing fine dots, the aluminum doesn't hold up as well as copper. In older stamps you will often find crumbling sections are made from aluminum, while the copper strips endure for decades. 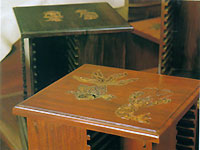 Once the design is complete, a thin aluminum strip is bent along the back face of the copper strips across the design, holding them in place. The back is covered with a thick substance to waterproof and help hold the strips. Traditionally this was done with patri, but as it was time consuming to prepare, most stamp makers today utilize a modern chemical mixture instead.

A handle is attached to the back face of the design and the entire stamp is cooked in hot water with songka for strengthening. The final polish is achieved by vigorous rubbing of a metal file across the surface of the cap to bring out the copper shine.

Note: This company may not longer be in business.